Thousands of swords from Europe’s early Middle Ages have been recovered. Many of these are too corroded to show any detail but 19th Century archaeologists noticed that some had markings on the blades. Further investigation showed that many of these had the name Ulfberht on one side and geometric markings on the other.

The archaeologists believed that they had discovered the work of a master swordsmith and, since these swords were often found in Scandinavia, they were thought to be of Viking manufacture. A bit later, scholarship held that Ulfberht was a Frankish name. Later still, more rigorous dating showed that the swords were made over a period of two hundred and fifty years or more — from 850 – 1100 AD. Now the theorists held that Ulfberht was the medieval equivalent of a tradename, possibly the place where the swords were turned out. Ulfberht was the sign of quality — like Porsche, one archaeologist suggested.

Iron isn’t that easy to turn into a good finished tool or weapon. It must be heated to 1500° Celsius — difficult in Europe a thousand years ago — and that’s only the beginning. The molten iron must be cooled and worked and reheated, each time resulting in a slightly different composition of iron. The goal was steel: steel that was hard, but not brittle, steel that could strike a hard object and neither bend nor shatter, steel that could hold a sharp edge.

Bog iron isn’t that difficult to find in northern Europe and it can be melted to a stage where it can be worked, although it may only be the slag ingredients, not the iron, that is truly molten. Archaeologists do this kind of reconstruction all the time, locating bog iron and melting it and forming it a bit. Probably there were a lot of swords made this way. These were not great weapons and there are accounts of men straightening bent swords with their foot in the midst of a battle.

Somehow, at the end of the 8th Century, the Franks began turning out good swords, ones much easier to produce than the old pattern-welded blades. The Carolingian monarchs tried to forbid their export so that the weapons could not be used against Frankish troops but was unable to stop the traffic in arms.

Allen Williams has examined some forty-four Ulfberht swords and discovered that the earlier-made weapons were forged from fine crucible steel possibly from Persia or Afghanistan. In this process, iron was smelted in a sealed crucible and slowly allowed to cool. The resulting steel is of good quality with enough carbon content so that its melting point had lowered and it could be finished by local craftsman into excellent swords. Many Ulfberht swords have been found east of Frankia all the way into present-day Russia, possibly along Viking trade routes. But not all the Ulfberht swords are of good quality — many, especially the later-made weapons, are brittle and might shatter when struck by the real thing. Even so, some have very decorative hilts, finely worked with silver or other inlays, so they probably were made for wealthy customers. And they are still marked “Ulfberht”.

Imitation Ulfberht with silver wire worked into the hilt and pommel.

Mind you, the markings differ slightly. The original swords are marked “+VLFBERH+T” where the “+” is a cross. Later versions have the cross after the T, or two crosses, one quite fancy, on either side of the name. This is the equivalent of those “Rollex” watches that guys try to sell you from the trunk of their car.

An Ingelrii sword from the London Museum.

So far, only a dozen or so of forty-four examined Ulfberht swords are entirely of crucible steel, though some of the knock-offs are of pretty good quality and some have crucible steel edges. There were other swordmakers who signed their work — Ingelrii, Cerolt, and Ulen, for example — but only Ulfberht, whether he was a smith, a guy who owned a shop, or a patron of the swordmaker’s art, was famous enough to attract this kind of imitation, one of history’s great trademark thefts.

Anne Stalsberg, “The Vlfberht Sword Blades Re-evaluated”. A hundred and sixty-six Ulfberht blades are listed with geographic distribution and considerable speculation on just who Ulfberht might have been.

Alan Williams,”A Metallurgical Study of Some Viking Swords” (PDF). Williams’ paper shows the difference between original and knock-off Ulfberht swords. There are a lot of photos at the article’s end.

An Ulfberht auctioned by Christie’s. It realized more than $18000, even though it’s broken. Real or imitation? At this distance, it probably doesn’t affect the value.

The header image was done by Lee Mero probably in the late 20s. This picture hung in my great aunts' house for as long as I can remember. I have cropped the poem that ran at the bottom of the image. 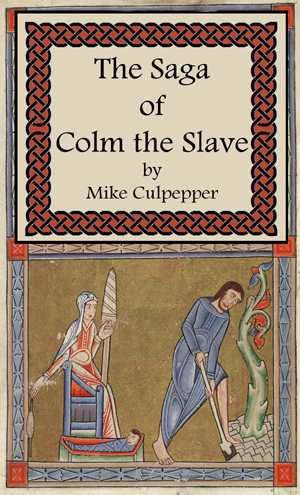 The Saga of Colm the Slave is a novel set in 10th Century Iceland. You can download or get a FREE sample here. or buy the paperback here .