The great Argentinean writer, Borges, was buried in Geneva. On his tombstone are inscriptions in Old English and Old Norse and a single enigmatic line in Spanish. What is going on here? 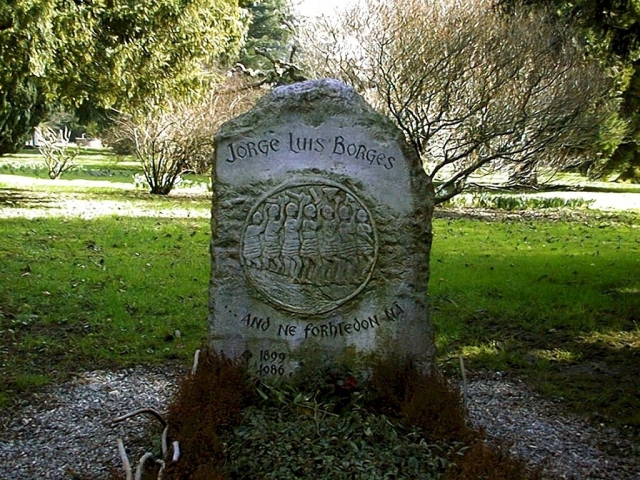 Borges spent his youth in Geneva. His parents, ignorant of world affairs, travelled there in 1914 and then were unable to leave because of the First World War. Borges learned Latin during his stay and took a stab at Old English, though he said he did not really learn the language well at that time. In 1921 the family returned to Argentina.

Borges was close to his parents. His father gave him books that were much enjoyed including a translation of Icelandic sagas by William Morris. Borges learned to read Old Norse and Old English and developed a love of this literature that is cited often in his work. “There is a flavor that our time (perhaps surfeited by the clumsy imitations of professional patriots) does not usually perceive without some suspicion: the fundamental flavor of the heroic.” (from “The Modesty of History”)

And, Borges was fascinated by the ancient public poets — Homer, the Beowulf scop, the unnamed bards of ancient Ireland. Several of his stories, such as “The Mirror and the Mask” and “Undr“, tell of these singers and their quest for the proper, wondrous word. I think that “the heroic” in Borges’ telling belongs to the singers as well as the sword-wielding subjects of their songs. These anonymous poets are often described by Borges from accounts that he has discovered in imaginary books. All literature, imaginary or extant on paper, is a whole, something that already exists in Platonic reality, and the poet’s task is to uncover some part of that already existing art. 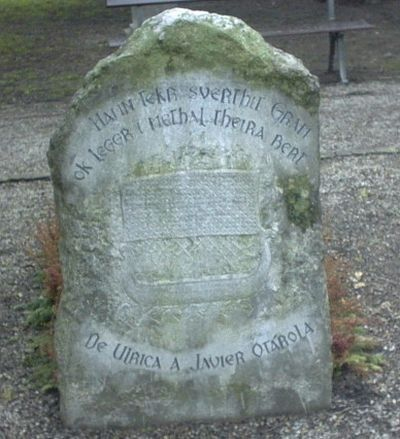 Borges went blind — not all at once, but as a continuing affliction that came and went and slowly wore down his vision. Perhaps he recognized the similarity of this inexorable doom to the struggles recorded in many heroic poems. As he lost his vision, Borges became more dependant on his own stored word-hoard, much of it from Dark Age Europe.

He gave lectures on Icelandic saga and Anglo-Saxon poetry and other heroic themes. Maria Kodama first heard Borges speak when she was twelve or so. In her teens she attended some of his lectures. In 1975 she became his secretary, guide, and companion for the remainder of his life. 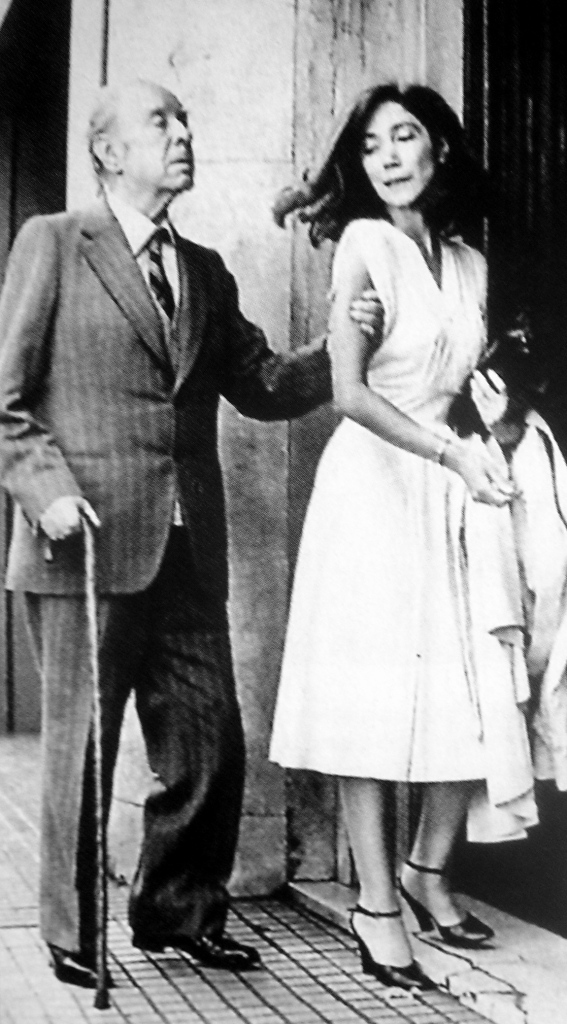 When Borges discovered that he had cancer, it had already spread to his liver. He knew this was a death sentence. He married Maria — although he had been separated from his first wife since 1970, Argentine law did not then allow divorce and re-marriage, so Jorge and Maria were married in another country. Then they travelled to Geneva. Borges said that he regretted writing harshly of the city in his youth and now remembered how good his childhood there had been. He had been “mysteriously happy” in Geneva, he said. A few months later, he was dead.

Maria said later that she didn’t recall who came up with the design for the stone, perhaps much of it was left to the sculptor, Eduardo Longato. The shape is vaguely that of a rune-stone. Each side contains a pictorial element and some writing. 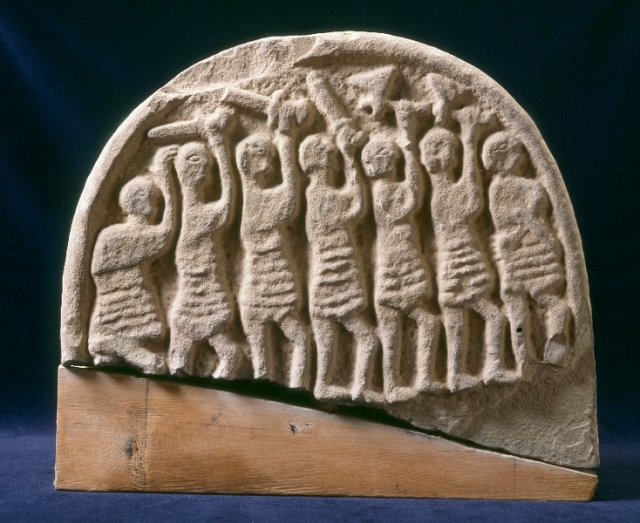 The face of the stone depicts a scene of warriors in armor that echoes the Lindisfarne gravestone, which probably depicts memories of a raid by Vikings in 793. “Jorge Luis Borges” curves over the top of the stone. Underneath the words “…and ne forhtedon na”, then the dates, “1899 1986” with a small Celtic cross shaped like that at Gosforth.

“And ne forhtedon na” is Old English for “Be not afraid” and is a quote from the poem “The Battle of Maldon” which Borges translated and often discussed. In 991 a Viking force landed near Maldon on England’s southeast coast. They were met by a local force led by Ealdorman Byrtnoth. The Vikings landed when the tide was full; there was a narrow causeway between them and the English force could cut them down easilly if they advanced. The Viking chief, possibly Olaf Trygvasson, later crowned King of Norway, challenged Byrtnoth to wait until the tide ebbed so that the forces could meet equally. Byrtnoth, through his “ofermode” (pride? arrogance? high-thinking? lofty manner?) agreed. The poem is missing some lines at the beginning and the end. At line 17 of the fragment we have, Byrtnoth instructs his young warriors, telling them where to stand and hold their positions. “Hold your shields firmly in hand,” he says, “And be not afraid.” Of course they are doomed and the fact that we already know that lends a special signifigance to every utterance.  It probably delighted Borges that the resonant words came from a vanished text, burned up in a library fire in 1731. We only have a copy and scholars debate how accurate it is.

The reverse of the stone depicts a Viking ship, possibly derived from a Gotland runestone. In Norse thought, ships were associated with death, that last great voyage into the unknown. Above the ship is a line from the Old Norse Volsunga Saga: “Hann tekr sverthtt Gram ok leggri methal their abert”. Sigurd, who is disguised as Brynhild’s husband, lies down beside her: “He took the sword Gram and laid the naked metal between them.” 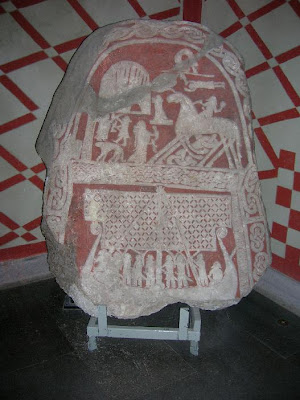 Underneath the ship are the words: “De Ulrica a Javier Otárola”. Ulrikka and Javier are characters in Borges’ story “Ulrikka” which is pefaced by the earlier lines from Volsunga Saga. The story is about the romance between a young Norwegian woman and an older man in York. There is some mention of the Viking background of the city. The two walk together in the evening and she tells him not to touch her then, but that later, in her room, he may possess her. This story had special meaning to Maria and she and Borges used Ulrikka and Javier as secret names for one another.

After Borges’ death, Maria had a lot of bad press in Argentina and she may have deserved some of it. There was an effort to have Borges’ body moved back to Buenos Aires which Maria disdained as an effort to gain control of his estate. After all, in Argentina she was not legally married to Borges. She spoke of herself not as Borges’ widow, but his “love”, which also drew some criticism.

Argentineans and others sometimes make pilgrimages to Borges’ grave. Last year, a much lesser writer was photographed pissing on the site. He said the water making was an artistic act. Clearly, he had no sense of the heroic at all.

Battle of Maldon in Old English with translation, glossary, and so forth.
Collected Fictions by Borges. Includes “Ulrikka”,”The Mirror and the Mask”, and “Undr“.
“The Modesty of History” is included in Other Inquisitions: 1937-1952

, translated by Ruth Simms.
Volsunga Saga, Morris translation as Borges first read it.
Borges scholar Martin Hadis has apparently written a book or article on this topic. I have not read it.

15 comments on “The Tombstone of Jorge Luis Borges”

The header image was done by Lee Mero probably in the late 20s. This picture hung in my great aunts' house for as long as I can remember. I have cropped the poem that ran at the bottom of the image.
ccbc@netidea.com

Jack Tait is a cotton planter from an old Arkansas family. Arkansas Justice and Me follows Jack from the Depression to the Civil Rights era. Jack wants to do the right thing, but how can a man do right in a place that has gone so wrong?

You can download or get a FREE sample here. or buy the paperback here .