Juzo Itami directed his first movie at the age of fifty. Fourteen years and eleven films later, acclaimed as one of Japan’s greatest directors, he was found terribly injured on the sidewalk outside his office building and died soon after. Officially, his death was ruled a suicide, but there are also allegations that he was murdered. 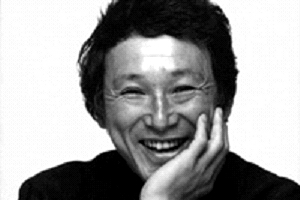 Itami’s father was Mansaku Itami, an important director in pre-war Japan. Itami worked at a number of jobs but drifted into film and television as a writer and actor. He did not try directing because he did not wish to “challenge the mountain” of his father’s legacy. But it was while meditating on his father’s 1946 funeral and the interaction of the mourners that Itami came up with the idea for his first film in 1984.

A Funeral (also released as The Japanese Style of Death) showed a family dealing with the death of the wife’s father. The film satirized certain aspects of Japanese society (the family watch a videotape to learn how to conduct a proper funeral) and also hints at broader problems such as the gap between the generation that had lived through World War II and their children. Itami said that Japan’s great problem was that it lacked a father, a moral exemplar, and so had given over to mindless pursuit of pleasure. It might be significant that Itami was thirteen when his own father died.

Itami’s second film, Tampopo (=”dandelion”) is probably his best known and possibly his greatest, certainly it is the greatest Food Film ever made. Yes, greater than Babette’s Feast, than Big Night, than Man, Woman, Eat, Drink (or its remake, Tortilla Soup) — these other films all deal with one aspect of food and its importance; Tampopo deals with Food in its entirety and along the way pokes into various other areas of human life and of film. And, it is funny. This review has three clips from Tampopo: the first pokes fun at Foodies (“Caress the surface with your chopstick tips…”), the second is from a sequence on food and sex (no nudity,safe for work?), and the third is a comic episode featuring a food-fondler.

Tampopo‘s hero, Goro, is based on spaghetti western prototypes — Itami called his movie “a noodle western” — he rides into town (he’s a truck driver) and helps out a widow trying to run a noodle shop. She does not understand why her business is unsuccesful until Goro tells her that her noodles are sincere but lack guts. He teaches her to make gutsy and profound noodles, then rides out of town. This is somewhat unusual in an Itami movie since it is generally the female character who puts things right. This woman is always played by Nobuko Miyamoto, Itami’s wife.

Nobuko Miyamoto confronts the Yakuza in Minbo no onna

In other films she plays a revenue agent tracking down corrupt businessmen (A Taxing Woman and A Taxing Woman Returns), a “golden geisha” who aids the incompetent men who come to her for sex (Ageman aka Tales of a Golden Geisha), a woman who turns around a failing business (Supermarket Woman), and a lawyer who takes on the Yakuza (Minbo no onna aka The Gentle Art of Japanese Extortion). This last film is the one that may have killed Juzo Itami.

Minbo no onna: A fading hotel is trying to get a lucrative contract. The Yakuza prefer the place as it is. A comic war between hotel employees (led by Nobuko Miyamoto’s character) and the gangsters ensues. The female lawyer instructs the hotel workers how to stand up to the criminals who are no match for her. This film, too, shows Itami’s view of a fatherless Japan that must look to women for its strength. Japanese men have four great weaknesses, says Itami, they “can’t stand loneliness, can’t make decisions alone, can’t face anyone who disagrees with them and can’t accept responsibility for their mistakes.” And, Itami also said, the Japanese take themselves too seriously, they cannot laugh at themselves.

The Yakuza apparently can neither face criticism nor laugh at themselves. Shortly after Minbo‘s release in 1992, two of them attacked Itami outside his home and sliced him up with knives. “They cut very slowly,” said Itami afterwards, “They took their time. They could have killed me if they wanted to.” As it was, Itami was sent to hospital in serious condition. That, of course, gave him an idea for another movie about a man dying in hospital (Daibyonin, (=The Last Dance) that is a satiric look at the Japanese health system. This was followed by Shizukana seikatsu, a gentle look at the serene life of a retarded man (based on a book by Itami’s Nobel prize-winning brother-in-law, Kenzaburō Ōe), Supermarket Woman, and Woman in Witness Protection, released shortly before Itami’s death. He was rumored to be writing a movie that would, like Minbo no onna, examine crime and corruption.

In late 1997, a Japanese tabloid was about to run a story claiming that Itami was having an affair with a young woman. On December 20 Itami was found lying on the sidewalk outside his office building. On his desk was a note denying the affair but saying he had no option except to clear his name through suicide. This baffled those who knew him, including his wife. Whether he had been having an affair or not, he was unlikely to have been so disturbed about such a story, and it was inconceivable that the man who mocked so much that was false about Japanese society would succumb to the phony honor of its suicide culture. The police did investigate the death as a murder but the official verdict is still suicide.

In 2005, journalist Jake Adelstein was working on a story about the Yakuza and received a death threat. He backed off for a time but eventually published Tokyo Vice, a book exposing the workings of the Japanese criminal organizations. During his investigation, Adelman interviewed a gangster who claimed to have murdered Itami. According to the informant, he and some other thugs took Itami to the roof of his building and held a gun to his head. “Jump and perhaps you will live,” they said. “Don’t jump and we will blow your face off.” Itami jumped. “He didn’t live,” cracked Adelman’s informant.

In the years following Itami’s death, it became difficult to find recordings of his movies. Copies of Tampopo went for as much as $300 on eBay. Other movies have never been available on DVD. Is it paranoia to think that someone wanted to erase Itami’s legacy as well as his life? In Japan, a set of five Itami DVDs was finally released in 2005. Only 13000 were made and they sold out right away. But Itami DVDs are now slowly trickling into the market and may be purchased by anyone wanting to see the work of this great director.

11 comments on “The Killing of Juzo Itami”

The header image was done by Lee Mero probably in the late 20s. This picture hung in my great aunts' house for as long as I can remember. I have cropped the poem that ran at the bottom of the image.

The Saga of Colm the Slave is a novel set in 10th Century Iceland. You can download or get a FREE sample here. or buy the paperback here .